The entire country is outraged by the brutal gang rape and murder of the 8-year old Asifa Bano. The argument by many people that this is just an addition to the list of rape cases in India doesn’t make the incident any less horrific.

Here is a short description of Asifa Bano’s case:
In the Kathua district of Indian powered Jammu and Kashmir, there was a temple custodian named Sanji Ram, who apparently wanted to terrorize and drive out Muslim nomads in the Hindu majority area. A girl named “Asifa” had been grazing her family horses in the meadows, which by the way is perceived to be a completely safe and a “permitted” activity for women. He used the “opportunity” of this LITTLE girl being alone to show his power. He wanted to show his so-called strength and power to a little girl who doesn’t even know any of the past history or that there is a burning Hindu-Muslim problem in her area. Police told the court that Sanji Ram locked the girl inside the prayer hall, “performed rituals” before she was raped. Ram’s nephew invited his cousin who was miles away to come and “satisfy his lust”, which by the way he did. Two police officers had accepted hefty bribes to cover up the crime, who were then arrested. When Ram ordered the killing of the girl, one among the two police officers named Deepak Khajuria had told others to wait as he wanted to rape the girl one last time before she is killed. After all of them had “satisfied their lust”, Ram’s nephew killed her by strangling her and hitting her head TWICE with a stone. 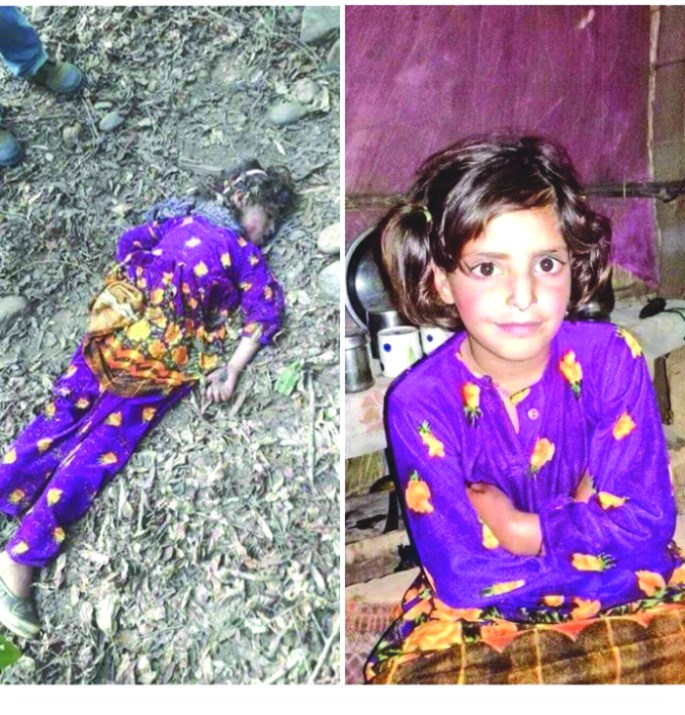 As any normal human-being, irrespective of caste, religion and gender, I am shattered. But apparently many people who are responsible for ensuring justice felt otherwise. Two of the police officers themselves were involved in the crime to start with. Along with the police officers there was a retired Government official and the so called “Holy” custodian of the temple. This holy custodian is the mastermind behind all of this. He had corrupted his juvenile nephew by asking him to abduct Asifa.

Lawyers did not want this case to come to the court for “political” reasons. Judicial system is the one that has the right to question even the leaders of the nation and lawyers are one of the most significant part of this system. Lawyers are the ones who have the power of fighting for justice in courts. Instead, all that the lawyers cared about was to PREVENT the charge-sheeting of the accused men.

One of the Government leaders was concerned about the financial losses due to tourism rather than the safety and justice being ensured in the country. For some Government leaders, who are supposedly “protecting” our country, this incident seemed just like an addition to the list.  There was/(is) a whole group of people “supporting” the accused. Where is this country heading to? Why is humanity dying in people? I never understand: “How can any human hurt a little kid?” I am lost on words to express my anger and frustration.

The girl was 8 years old. She wouldn’t have even known ‘What is sex?’ She wouldn’t have known that there was a Hindu-Muslim issue going on around her. She might not even know how to defend herself. What sort of cowards are these men to show their strength and power on a little girl. Little did the girl know that just going out to the meadows will get her raped and killed. There are two issues revolving around this: sexual assault and religion.

I am completely terrified by the fact that religion is even an issue here. The crime was committed by the Hindus to a Muslim girl inside a temple. Neither the Hindu God nor the Muslim God came to the rescue of this little girl. The girl’s family is helpless. If we, as the citizens of the country, and the Government do not support her for justice, we are not humans. “Community” and “Religion” should never stand in the way of one being a human. Lawyers protested against filing the charge sheet which is the first step to start the investigation formally. Apparently, they wanted to stop getting this case to the court for “political” reasons.

Should politics, religion and community stand in the way of justice?

Sexual assault is a crime that has absolutely no justification. According to some psychopaths: “If a woman gives up resisting when she is being attempted to be raped, it just means that she’s enjoying it.” Do you mean to say that this little girl enjoyed it when she saw a man coming towards her to insert his penis (which by the way she did not even understand why)? Do you mean to say that this little girl could defend herself single-handed against 8 men? Are you going to say that the 8-year old dressed provocatively or that she had so much attitude that made her a prey? Whose fault is this? Is this the girl’s fault or the men’s fault? What this little girl could have ever done to be raped and murdered?

We cannot bring back the lives of Asifa, Nirbhaya, Unnao and many other women who have been raped and murdered. But what we can do, is to at least support their struggle for justice. We cannot comprehend what these little girls and women have gone through but we can stop bringing politics, religion and community in the way of justice.

Obstruction of justice is Injustice too.