I have always been a proud advocate for women’s equality which essentially means that I have gotten into a LOOOOOTTTT of debates and discussions with relatives and others who know me really well. One question I often get asked is this: “In the name of equality, women just want to struggle like men. Why don’t you be relaxed and enjoy the life you have?”

My answer to everybody who have ever asked me that:

Let me describe a series of events that happened just recently in UP: 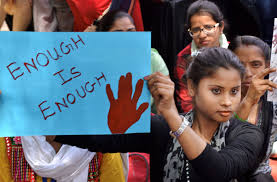 This incident is yet another proof for why women do not come out in the open when the perpetrator is someone highly influential. This is not something specific to government officials. In general, people are always scared to complain against higher officials, especially the influential ones. In Unnao’s case, what pains me the most is that this is not the first time people are supporting the rapists. The same thing happened in Asifa’s case too.

How many people actually thought of applauding the girl for reporting this case in the first place? It is very hard for a woman to go file a complaint for a rape, especially a minor girl, especially against an influential person, especially against someone as influential as a politician. It takes a great deal of courage to continue the case after all this has happened. Have we ever thought of appreciating the girl first for whatever she is doing? This little girl’s family is completely wiped out, one after the other. She herself is in critical stage. Despite all this, this little girl is fighting for life and firm on continuing the case. It is highly difficult to simply comprehend the amount of courage someone needs to do all of this. In this particular case, Unnao isn’t just fighting for herself, she is fighting for all of womanhood. Have we ever thought of applauding her for it? Instead, I see a lot of people blaming the victim that she had falsely framed the entire thing. Are you seriously kidding me? Do you even understand how much this little girl has to go through for something that is not even her fault?

It is easy to sit back and cheer for Iron Man or Wonder Woman but it is difficult to be one.

As common people, not only do we try to avoid becoming real life super heroes but also actively discourage and run away from people who are trying to be one.

I don’t want to be someone who supports the rapists nor remain quiet in the face of such an injustice. I believe that: “Silence in the face of injustice makes me just another accomplice”. And so, I wish to conclude by saying the following with immense proud and confidence:

“I couldn’t be more proud of this girl for what she is doing. In a world where even adults choose to run away from a problem, this little girl decided to face it head-on. She is not fighting just for herself but for all women at such a young age and I want her to know that she is not alone in her fight. There are a lot of like-minded people who will agree with me and stay with her throughout the journey. Let’s get Unnao the justice she deserves. She has endured too much for too little an age. The girl deserves to live in peace after all she has gone through. If she doesn’t deserve a victory, I don’t know who else does. More strength to this real life Wonder Woman.”